Exercising the right to write

That part isn’t all pleasant for people either—I get it. It’s a stressful time of year, even when it is also joyful.

But I notice all of this especially sharply at this time of year. And find myself feeling especially isolated. It’s deep winter, long nights, and the few friends I do have here are—well, caught up.

After some slightly off-putting interactions these past few days/weeks, I’ve made a firm choice not to devote too much time to those who have shown time and time again that they are unwilling/unable to be present, compassionate.

Those who claim to be friends, but aren’t really able to give—or receive—my presence.

When I ask for support, in a respectful way, I don’t expect people to drop everything and run to me. But, I would hope for a real answer about how much they can do this for me, realistically. Not an obligatory, distracted “half-there” reaction, but something real.

When I offer support, it is an offering, not a demand. However, sometimes I’m taken aback when the person on the other end does not receive it. I wonder what value I have to them in the context of the friendship, or maybe whether they think I’m capable of presence. Because, let’s face it, I can be self-involved too.

I often have found myself surrounded by people who are more supportive of me and don’t ask me for help often. These are the people who tend to get burnt out because they feel the need to be “needed.”

But when someone reaches out to me in vulnerability, that they require a deep listening, my advice, or something like that, feel honoured, valued, both as a friend and a person.

Not checking in with yourself and the other person in a real way leads to false promises, a lack of integrity, and generally poor behaviour. Maybe not even evilness, but being a kind of shitty friend (or lover or husband or sister or whatever).

I sound blamey because in truth I am a little angry at the moment. And I know I’m still learning too. I’m refining the process of self-inquiry on a daily basis. I have no choice but to do that in order to be a better human, hopefully, tomorrow. I’m also going to keep fucking up.

However, I want you to know, that when I say I’m there for you, I’m there. And I expect a certain level of give and take in that regard.

But I don’t think there’s anything wrong with wanting to live a life surrounded by people who value me deeply, in that way that we can be truly present.

So this year I re-commit to myself to stick with the people who presently practice both intimacy and integrity regularly, who understand it in the context of themselves as well as with others. Who aren’t so blinded by their own relationships, conflicts, work, dramas that we can’t actually respond authentically with each other, instead of just reacting out of ego—or obligation.

I want to be friends with those who can be vulnerable with me as well, who can receive my presence in the context of self-inquiry, not fixation or attachment or some ego-based BS.

No excuses, no externalizing. These are two of my biggest pet peeves.

Sure we all fuck up, we also have times that we can’t give as much attention to one thing or person as we might like. I get that.

But when I ask, please give me a real answer. Not an excuse. Not a half-hearted brush off. Not an obligatory set of meaningless words. Because it just makes me feel worse.

I’m not even pushing for time. I prefer quality over quantity where that’s concerned. Just be aware of how you’re being, how much you realistically want to offer, and be clear about it.

Please be real with yourself so that we can have an honest relationship.

I can’t afford to waste any more time on those who don’t (appear to) be able to grasp the concept of self-inquiry and therefore can’t truly be attuned to others in their lives who they supposedly care for.

Please see me. And I will see you.

Like Loading...
Posted on December 23, 2017December 23, 2017 by smallgrl 0
Didn’t you know that I saw it all,
a long time ago?
Disasters, shootings and
a perfect blue-eyed babe
that arrived
in spite of it all?
Didn’t you know I knew
how things would turn out?
I see things.
Since it is both a blessing and a curse,
I don’t mention it much.
(And besides, I worry it might sound
a little pretentious.)
So I curse myself daily
in the hope of some clairvoyance
where it’s most needed
and in the meantime I scrape by
on my boxed-in-but-not-bad
reality.
I suppose I could choose to thrive on seeing
instead of scraping by on what’s here,
but that would make me a dreamer,
and that’s not very practical now, is it? 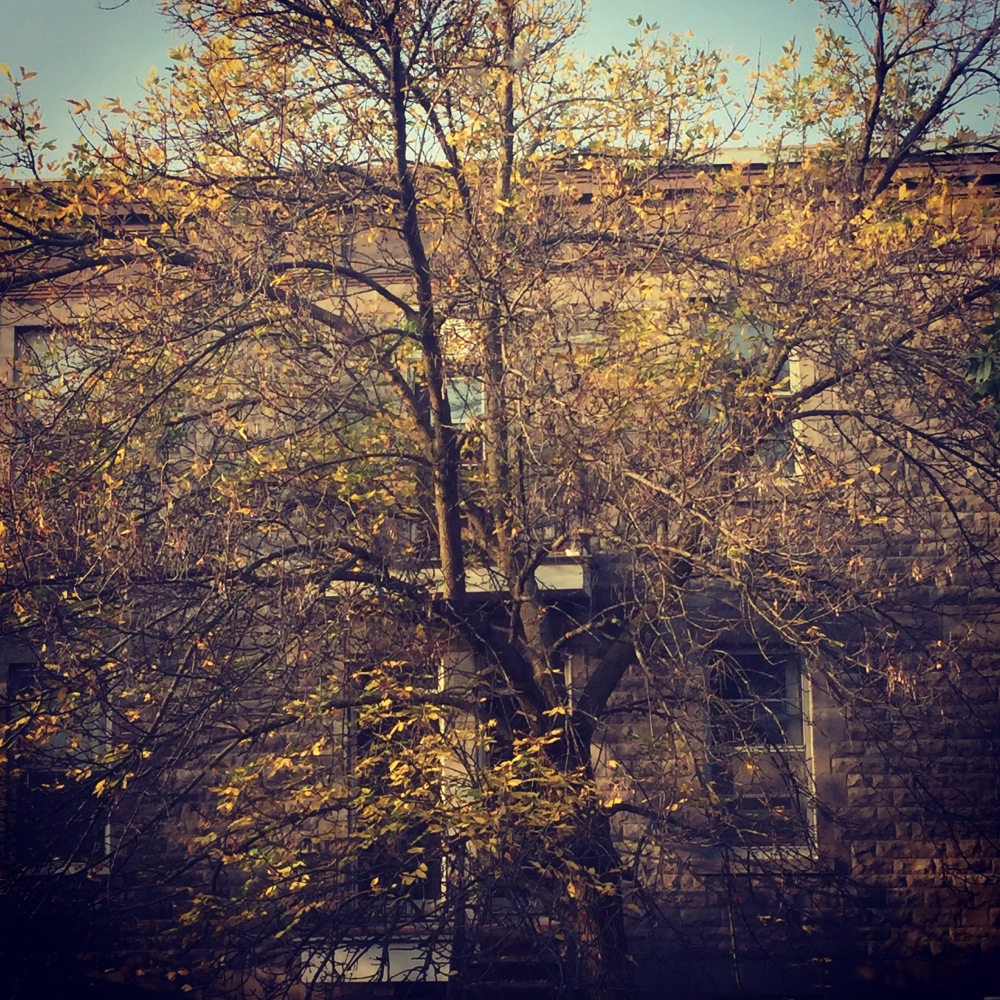 There’s almost nothing as soothing to me as waking early to a cool, bright morning after a full sleep, knowing myself, feeling full freedom in the day ahead.

It’s been almost exactly a year since I left for the UK, a trip that was full of mixed emotions. I was supposed to “make it” something, come home anew.

My Dad was on his way out of this world, he in BC, me in Montreal, and it was heart-wrenching. I went, and because of a passport issue, my trip got turned around. I felt like a failure, in part because this was a trip I was making “for” him in some sense. A last chance of him knowing freedom through me…maybe.

At least that what I told myself.

I made the trip as nice as possible, but it still felt…unproductive. Aside from a bit of exploring and relaxing, and visiting a good friend, nothing really happened. I had some peaceful moments, but nothing I couldn’t have had here, for the most part. The highlights were definitely Edinburgh (meeting up with Emily!!), meeting Jaime Khoo IRL (a freaking fantastic afternoon with a tour of York), seeing Sara (still not sure how someone can be quite so beautiful), reconnecting with Colin (20 years later, we still feel the same). I also quit my job, which was something that had been needing to happen, but of course, made things more challenging in some ways.

I spent November in Montreal, trying to be in touch with my mom, and basically waiting for “the” call. I walked, grieved, took space. It was actually pretty lovely, despite the sadness.

And then, the call. I sobbed hard. The grieving took on many different forms through the next little while.

I went to be with my mom for a bit, and it was lovely, hard. Still, there was a certain peace inside of me, even though everything felt disjointed. I went to LA for 2 weeks, then Vancouver for about 4 months. It was nice enough, but even that even turned sour in the end.

I felt supported relationship-wise, because I was around good friends. I needed that—always will. But I still didn’t quite feel like I was supporting myself. Financially things were dismal. I scraped by on bits and pieces of work, but still felt too scattered to really buckle down. I knew I needed a certain type of business guidance, but I didn’t know where I’d find it. And a fight broke out over money, a fight which made me feel smaller and more incompetent than I had in a long time.

I felt like I was climbing out of a long hibernation, only to be sort of shoved back down the hole a little. It’s kind of how I’ve felt all year.

I guess that’s what life does, generally.

Late March, I was back with my mom for a bit, then was invited to stay at an Ashram in the Kootenays with a dear friend. It was the first time I’d felt a hint of sobriety—literally and metaphorically—in ages. And things felt a little lighter.

That was early April. I bussed to Calgary and flew back home to spend April at my own space in Montreal. The point was really buckle down and move my business forward. But I knew I didn’t have long because my space was rented out. I needed the extra income and had planned to spend the summer elsewhere.

I remember sort of goofing around, then, still not buckling down. But I managed to scrape up enough cash to sign up for a copywriting course, which I followed haphazardly through the summer. I knew that doing that was exactly what I needed, but I wasn’t quite sure how until more recently.

I enjoyed the summer—time at my sister’s, my mom’s, with some good friends. There was a Picard reunion, camping, beautiful walks, plenty of day-trips, quiet nights, plenty of wine and simple dinners. And I can’t forget the fantastic (quasi-spontaneous) 39th birthday in Vancouver, thanks to a few stellar friends there.

I needed that company, the support, the freedom. This was my first summer not working full-time in probably 20 years, and it was glorious.

I returned from that trip two months ago, and immediately felt momentum as soon as I set foot in my own space. But between more rentals and a good friend visiting, I still didn’t quite get into the flow that I know I’ve been needing.

The truth is, despite all the good stuff, I’ve still been scraping—emotionally, financially, energetically. I realize now that, although it’s been great, I haven’t been able to find balance and focus very easily. I do have a few health issues and my business to tend to. I have come to terms with myself that I cannot heal or focus properly without complete space. I need (what seems like) a ridiculous amount of space to truly do the work.

So, it’s time to stay still for a while.

This morning is the first one in a while that I’ve known I can just stay. I now understand what being footloose is: as much as I love my people, I can’t expect too much of myself during those times. I can maintain, but not move forward. Without regular, long periods of alone time, I won’t deliberately practice the level of radical balance and self-support which is essential for staying centered while moving forward, both business-wise and personally.

I am grateful for all the arms that held me this year, for each and every adventure and calm moment together. But I’ve also been feeling new momentum, in part because that copywriting course and other growth work (via Kate B and others) has opened my eyes to what is really going on.

It’s not all pretty: there’s still a lot of negative/anger floating around inside, but I’m ready to approach it properly now. Alongside of this feeling of approaching it differently comes different twinges of possibility, entirely new things that I sensed through the past year, but never really acted on.

So I don’t now what true balance and radical self-support is really going to look like exactly, but I do know that health and business go hand in hand, and that it’s all right in here—in my apartment, in my heart.

This is the time to deliberately heal, build, grow.

And I’m ready to dig in.